What is the Difference Between Bitcoin and Blockchain?

The year 2017 will be known as the year that Bitcoin and blockchain entered into mainstream consciousness.  In that year thousands of articles and news stories were published discussing the rise of the price of Bitcoin and other cryptocurrencies.  Almost as quickly, by the end of 2018 all those stories turned into discussions about the fall in the price of Bitcoin.

There are many people whom are still bullish on Bitcoin.  There is also many that are now bearish on Bitcoin but bullish on the potential of Blockchain technology.  And then you have those who have no true understanding of how Bitcoin and Blockchain differ. For those people who fall into that last group, there is actually a distinct difference between Blockchain and Bitcoin.  I am going to explain to you what that difference is.

If you read my previous article Introduction to Blockchain Technology  you will have a firm understanding of what Blockchain is and how it works.  For those of you who did not, click on that link, take a read and come back afterwards.  Go ahead, this article will still be here when you return. For everyone else, I am going to provide a short refresher here:

Blockchain Technology is a form of distributed ledger technology that uses cryptography to secure, record and transfer blocks of time stamped and chronologically linked data across a shared network in a secure manner.  In more simpler words, Blockchain technology is currently the most secure digitally distributed ledger we have. As a result, digital transactions can be made and stored across the online network, in a highly secure manner and without geographical restraint.

Let’s hold onto that explantation for a moment and I will return to it shortly.  In the meantime, we are going to take a short trip back to the year 2008. To refresh your recollection, in 2008, the United States and many other parts of the world, was in the middle of a financial crisis.  Many people were losing money in their portfolios and losing confidence in their governments.  During this same time period and with the backdrop of the recession and global economic volatility, Satoshi Nakamoto (which is a pseudonym for the person or persons who created Bitcoin) published his famous whitepaper introducing Bitcoin.  In this paper, Nakamoto highlighted some issues of great concern.  One issue was the inefficiencies of internet commerce that mostly relied on financial institutions serving as trusted third parties to process electronic payments. A second major issue was with people’s reliance on currency backed by government bodies.  Satoshi Nakamoto’s response to both of these issues was to create

“A purely peer-to-peer version of electronic cash which would allow online payments to be sent directly from one party to another without going through a financial institution.”

The main philosophy behind this “peer-to-peer version of electronic cash” was to: (1) remove the third party intermediary and; (2) create a currency not backed by a central government. 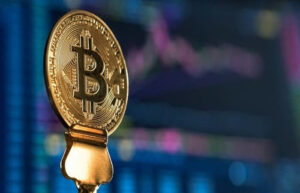 Virtual Currency is a digital representation of value that can be digitally traded and functions as a medium of exchange and/or store of value, but does not have legal tender (“fiat currency”) status in any jurisdiction.  Bitcoin is a virtual currency secured by cryptography to act as a new currency (cryptocurrency) that is completely decentralized, distributed and detached from any government backing, and allows peer to peer transfers from one party to another.  There are well over one thousand different cryptocurrencies available to the public but, Bitcoin is the most popular and most dominant by total market capitalization.

In order for Satoshi Nakamoto to create Bitcoin on a Blockchain he had to do so by first writing the Bitcoin Protocol.  This is the computer coded rules of the Bitcoin Blockchain. The protocol allows the network of participants (nodes) to govern and enforce the rules as a matter of consensus of the entire network.  The nodes do this by validating the transactions on the Bitcoin Blockchain consistent with the protocol. Only a total of 21 Million Bitcoins can be ever be mined (created) and the protocol was written to hit that mining cap in or around the year 2140.  As of this writing, approximately 80% of all Bitcoin has been mined.

Remember that by design, a public Blockchain is Immutable, Transparent and Trustless.  Since it is Immutable, Bitcoin transactions are highly secure and cannot be reversed. Since it is Trustless, individuals can transact using Bitcoin without the need for a financial institution or third party of any kind.  Additionally, Bitcoin is not tied to any governmental system. It was not created by any governmental body and therefore in theory, is not beholden to governmental actions. Another financial crisis like 2008 should not directly affect the value or volatility of Bitcoin.  These were the two main goals of Satoshi Nakamoto when creating Bitcoin. They would not be able to be achieved without Blockchain technology. Bitcoin and all other cryptocurrencies are not Blockchain but they are Blockchain built. Without blockchain technology, these cryptocurrencies as we know it could not exist.

© Keala Advisors 2020 | All Rights Reserved | Partner with a business consultant from a legal and financial background, with technical expertise. Let our blockchain experts guide you through the myriad amount of opportunities with blockchain technology.

Emerging Technology solutions that we consult on include but are not limited to: Blockchain, Cryptocurrencies and Digital Assets, Internet of Things (IOT), Machine Learning, Software as A Service (SAAS), Virtual Reality and Artificial Intelligence.

Keala Advisors’ consulting team is comprised of experts in the fields of law, finance and technology.

Learn more here about developments in blockchain and other emerging technologies.